Since the recent project report, there has been progress with the bridge over the Cut. Alan Mitchell of Maltech and the Internal Drainage Board (thanks to Stephen Edwards) have moved the bridge back on to its gabions. 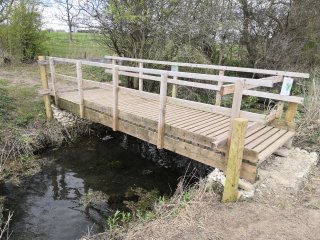 It is now squarely above the gabions, with either paving stones or timber between bridge and gabions. There is a step up to the bridge at each end, but it is now usable. The timber barriers seen in the photograph will be removed shortly.

Further work is currently being planned for later in the year, when the ground will have dried out more. The work will be aimed at checking the gabions, reducing the bridge's vulnerability to flood water, and anchoring the bridge to prevent significant movement.